Uchenna Jones went from being told she’d never be able to run again to founding a Madison 5K focused on “faith, fellowship and fitness.”

The 42-year-old married mother of three sons is the force behind the 3-year-old Madison Gospel 5K, modeled on a similar event she came across in Chicago in 2017 as she was just starting her distance-running journey.

Jones, a West Sider and labor and delivery nurse, broke her right leg in 2003 while jumping out of her second-floor apartment window to escape a fire.

Thirteen years and nine surgeries later, the 6-foot-1 former basketball player weighed more than 350 pounds. Today she credits her former trainer, pastor, and friends and family for helping her shed more than 100 pounds and completing more than 70 races, including about a dozen half-marathons and two marathons.

How did the Madison gospel run come about?

I was going on my own personal journey of health and wellness and lost a ton of weight and realized that running is big in Madison. I did what they call the couch to 5K. I did my first one in Illinois because I was so self-conscious doing it here. I ran with a friend who was doing it so it built my confidence.

In the process of doing that, one of the things that I was noticing was that my family’s overall health and well-being was improving. My kids were more active. My husband was more active. And in all of that I was like, how can I bring something that is so easy to do to a community that may have different views about it? I want to figure out how to create space for the entire family. Not this notion of go get a babysitter so then you can go work out. No. Can you work out with your family? And what was the easiest thing? Get a pair of shoes, get a pair of sneakers and go walking. 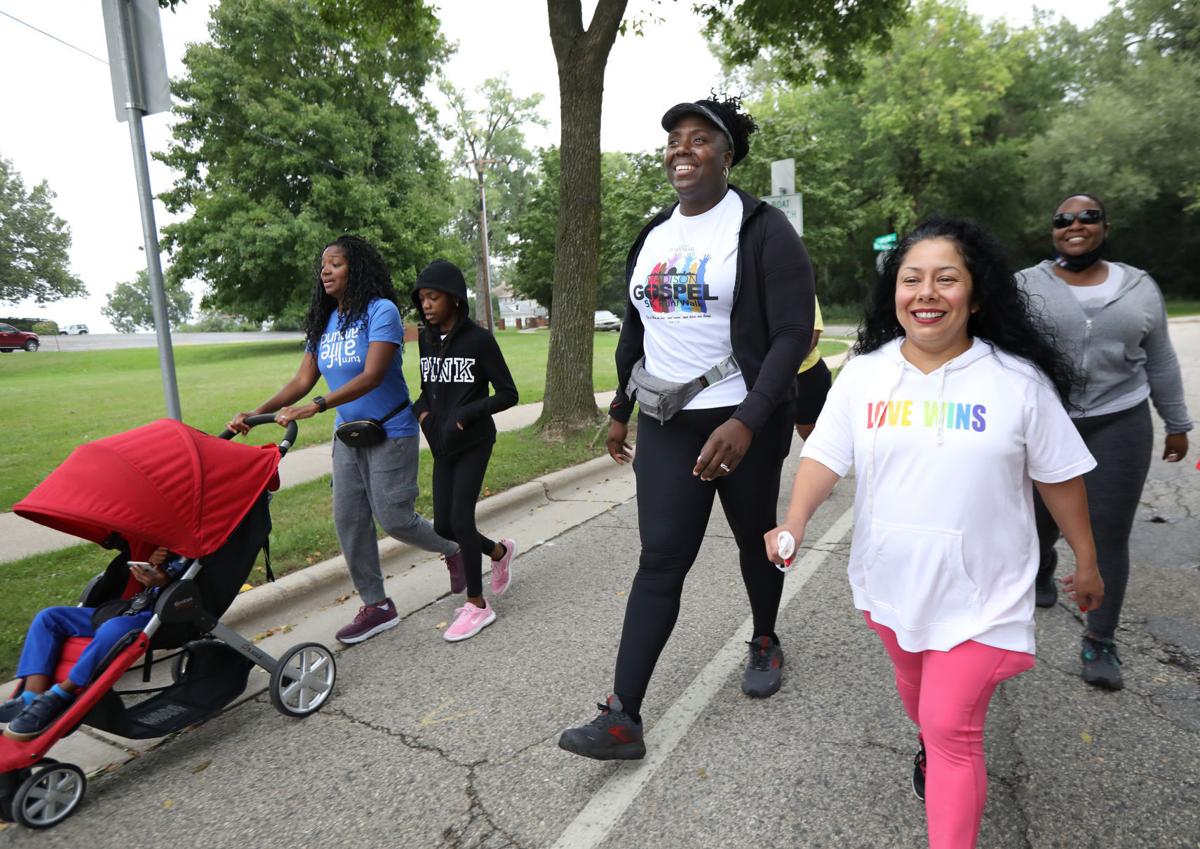 Uchenna Jones, center, walks with Michelle McKoy, right, and Loriell Johnson, left, at Olin Park. Also participating are Johnson's children: Diara, 11, in the dark hoodie, and Derion, 4, in the stroller. A key goal of the Madison Gospel 5K is getting families exercising together.

Being on the South Side of Madison is important to the gospel run?

I lived for a long chunk of time in my college career down off of Park Street. It’s a beautiful area, but it gets a bad rep because it’s low-income, predominately people of color.

So I said, what if we bring attention to that side of town while celebrating and pulling people out of their comfort zones? All these big races run through popular parts of town all around the Capitol; the majority of people don’t live there. If we’re going to create opportunities to invite people of color, you’ve got to create races geared toward the population where they live so they can celebrate their neighborhood.

What do you mean that some communities might have a “different view” of running?

I would say communities of color. When I would go and run, I would see other people of color there. Not a lot, compared to the thousands of white folks. But I realized that a lot of the people of color that come to the races are from out of town. You have populations of communities of color here, but they’re not participating in these events because they feel it’s not for them.

Because they don’t see other people of color?

Or just because of their preconceived notions, because worldwide people of color dominate (in sports). The perception of (running), it looks like only white people have access. But we all have access.

What kind of mix of runners have you had?

It’s really diverse. We have families of color, but it’s trying to bring different groups of people together to see each other outside of work-related events or other types of events. Bringing white individuals from various communities into a minority-based community, where the perception is the South Side is dangerous, and they come and they’re like, “I never knew this place existed.”

When you’re wearing running clothes, you got your running shoes on and you’re trying to go from the start to the finish line, you’re just like everybody else. We have a good population of white people that participate, but we also have a good chunk of families of color. And that’s the whole point — the whole family.What role does religion play in the gospel run?

The Christianity part is not out-facing, meaning like you have to be a Christian to participate. Our goal is to love on our community and to come together for a common goal, which is to be healthy and whole. Having the faith to be able to do things that you didn’t think was possible. The whole Gospel for me means the good news. We want to be Madison’s good news.

Advice for people at their low points?

One of the things that I learned was you always have to work on being happy. Being happy is not tied into a relationship. It’s not tied into your job. It’s that personal satisfaction that you’re living your best life. That was a revelation that I had. What was hindering me from living my best life — those were the things I was addressing.

Check out the full article on their site here.